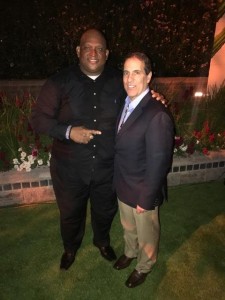 A year ago, nobody knew who Dr. Anthony Scianni was in dental sleep medicine . In only six months after joining the American Sleep and Breathing Academy (ASBA), he has been elected to the board of the ASBA and now is one of the fastest rising stars in dental sleep medicine. He is the only dentist selected by David Gergen and the Pro Players Health Alliance to treat former pro football players for obstructive sleep apnea in the  New Jersey chapter of the  National Football League Players Association (NFLPA). At the Pro Bowl game, a fan in the stands walked up to him and David Gergen and said, “You are the guys doing dental sleep medicine for the national football league aren’t you?” Gergen leaned in and mentioned to Scianni things like this will  be happening more and more as he continued to work with the former players.

The NFL is multifaceted and yet very tight niched. Recently, a 42 million dollar dental program for general dentistry paid for by an NFL fund was presented to David Gergen and the Pro Players Health Alliance to administer and manage. Gergen being in orthodontics and removable appliances (TMD/Sleep) his entire career, knew he needed to reach out to a dental expert. Because of his success with Gergen in the ASBA and the NFLPA dental sleep program, his first thought was to turn to Dr. Anthony Scianni. Dr.Scianni, who is a well respected dentist with over 20 years of experience in general dentistry and dental insurance, served as  an dental insurance consultant for over 8 year right out of dental school.  Gergen instantly knew that this was a perfect fit for the new NFL program. Gergen is always loyal to the former players and his industry - dentistry. So he knew he had to find a way to make sure the fund will be managed and administered properly and at the same time be confident that the former players still  receive their maximum dental benefits. Gergen and Scianni will roll out in April the first ever NFLPA dental program paid for by the fund - up to $2,000 per player annually. Dr. Scianni has be named the Managing Director of Pro Player Health Alliance.

A New Jersey native, Dr. Scianni graduated from Rutgers University in 1982. With a Bachelors Degree in microbiology and business, Dr. Scianni entered dental school at the University of Medicine and Dentistry of New Jersey. He received his D.M.D. degree in 1986 and graduated at the top his class with honors. Since graduating from dental school, Dr Scianni has followed a tradition of high-quality dentistry with personalized care. His philosophy is to use the latest techniques and technology to help maintain the patient’s oral health.

Strongly committed to ongoing professional education, Dr. Scianni participates in many continuing education courses, seminars and clinics. He has attended over 1000 hours of continuing education in implant, cosmetic and restorative dentistry and sleep disordered breathing. He has received advanced training in implant dentistry from N.Y.U. College of Dentistry as well as  advanced training in cosmetic and restorative dentistry from some of the world’s most renowned clinicians. Dr. Scianni is affiliated with multiple dental associations including; the Academy of General Dentistry, the American Academy of Cosmetic Dentistry,  the American Academy of Oral Implantologist, and the American Sleep and Breathing Academy. He is also an expert contributing writer for a local magazine.

Dr. Scianni has over two decades of practicing dentistry in New Jersey and relocated his practice, Renaissance Smiles to Colts Neck, NJ in 1993. Through his constant pursuit for perfection, Dr. Scianni incorporates the latest technology and the most advanced techniques to provide his patients with the highest level of care possible. Dr. Scianni and his team are committed to staying up to date on the most recent advances in dentistry and the treatment of obstructive sleep apnea. As his general practice grew and through hs treatment of patients over many years, Dr. Scianni recognized that many of his patients had sleep disordered breathing problems that were not being diagnosed or treated by their physicians.

Because Dr. Scianni has found it increasingly important to devote more time and resources to the treatment of obstructive sleep apnea which affects over 18 million people and which is largely undiagnosed, he has opened  The Center for Dental Sleep Medicine. If you have any questions about general dentistry, dental sleep medicine or you want to be part of the Pro Player Health Alliance programs, contact David Gergen at 602-478-9713.

« ASBA Diplomates Will be Participating in a Sleep Diagnostic and Therapeutic Health Program at the 2017 NFLPA Annual Meeting
Sleep Dentists: A Big Hit at NFLPA Annual Convention »
Copyright © American Sleep and Breathing Academy