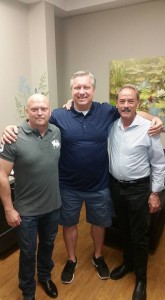 “Dr. Rod Willey who is an American Sleep and Breathing Academy Diplomate/Board Member and founded Koala Centers for Sleep Disorders, has been my largest account since he started doing dental sleep medicine four years ago. In one amazing month he started 106 cases! Month in and month out, Dr. Willey’s practice is starting 60 cases. He has this proven track record and I believe it is because he knows how to market,” says David Gergen, CEO of Gergen’s Orthodontic Lab.

All Koala franchise owners are members of the ASBA, giving them access to a full library of expertise that come direct from doctors like Dr. Willey as well as the opportunity to work with current/former NFL players locally. For example, the Koala of Arrowhead is close to the Arizona Cardinals stadium and is working to connect that aspect of marketing by centering TV and radio ads around this demographic. The proven marketing plan will be mornings on KTAR with David Gergen, Executive Director of the ASBA, Cardinals great Ron Wolfley, voice of the Arizona Cardinals and Roy Green who was just announced by the Cardinals that he will be joining 15 other former players in the Ring of Honor. He is also considered by many to be the greatest Cardinals player of all time; he played defense, offense and ran back kick and punt returns.

Wolfley, who was using CPAP prior, says he is “excited for the next time he travels because he won’t have to carry around all of his CPAP equipment.” Before Roy Green received his appliance, he had three heart attacks and two strokes. Since being treated, Green hasn’t had any serious health complications. This makes for two perfect examples of people who publicly support the cause and will aide immensely in the effort to spread awareness of sleep apnea throughout the community.

For more information on Koala Centers or the opportunity to market with NFL greats in your community, email info@myasba.com or call 602-478-9713.