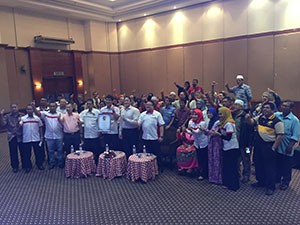 LUMUT, MALAYSIA: A total of 110 military veterans in Perak participated in the largest sleep apnoea test to raise public awareness on the danger of the disorder as well as to educate them on the symptoms, diagnosis and treatment.

Braebon Malaysia Sdn Bhd President, Jojo Chegne said the test was carried out because one in three Malaysians aged 45 years and above had snoring problems with the possibility of obstructive sleep apnoea (OSA) syndrome.

He said the participants, who were the members of the Perak Malaysian Armed Forces Veterans Association (PVATM), aged between 45 and 76, underwent the test at the Swiss Garden hotel in Segari last night.

"Before they went to sleep, all of them were hooked up to the apnoea testing equipment called Medibyte Jr, to record their breathing patterns, snoring, oxygen levels, heart rate, chest movements and sleep position," he said here today.

Mr. Chegne said the test revealed that 34% of the participants had severe sleep apnoea with as many as 45 pauses in breathing per hour while sleeping.

"This causes a lack of oxygen in the blood and brain which can lead to many other health problems.

"In fact, the lack of oxygen especially in the brain can be fatal if left untreated," Jojo said.

He said those suffering from OSA would experience between 10 and 60 seconds of breathing pauses each time, and up to 400 times each night.

People with OSA often wake up suddenly due to shortness of breath, he added.

Take a closer look at the Technology behind BRAEBON Click Here