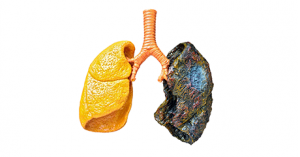 demonstrate that the expression of the pathways in immune responses is decreased in COPD patients. The researchers examined the relationship between NLRX1, the protein known to inhibit the MAVS/ RIG-1-like helicase pathway, in the clinical stage of current and former smokers with COPD.

The team found that measured levels of the protein are a sign of cigarette induced emphysema, similar to the lung destruction that is seen in patients with COPD.

“This is a new school of thought in terms of what causes emphysema and a new school of thought regarding how cigarette smoke does what it does,” corresponding author and pulmonologist Jack A. Elias, MD, dean of medicine and biological sciences at Brown University, explained in a press release. “We’re showing that a lot of what’s going on is related to mitochondria.”

Then, the investigators repeated a similar experiment in mice models. They were able to show a direct relationship between cigarette exposure, NLRX1, and the MAVS/ RIG-like helicase pathway. In this experiment, when the mice were exposed to smoke, they demonstrated lower levels of NLRX1 expression than the control mice which were not exposed. Mice that were biologically engineered to lack the gene for NLRX1 developed an advanced degree of emphysema when exposed to the cigarette smoke.

“Our observation is that NLRX1 is a critical inhibitor of MAVS/ RIG-like helicase signaling that is affected by cigarette smoking exposure,” said study lead author Min-Jong Kang, a researcher at both Yale and Brown, continued in the statement. “We observed that the levels of this molecule could explain diverse aspects of disease severity and patient’s symptoms.”

Through even more experiments, the authors of the study solidified their hypothesis that NLRX1 is connected to the MAVS/ RIG-like helicase pathway in the context of cigarette smoke exposure in both human and mice models.

However, there are still unanswered questions. Specifically, the researchers have yet to determine exactly how cigarette smoke suppresses NLRX1 in human subjects. One difference the scientists noted between humans and mice models of this experiment is that once the cigarette smoke exposure ceases in mice, the inflammation tends to die down – but in human cases, it does not.

“We now have a common denominator that seems to bring all these hypotheses together,” Elias concluded. He added that single nucleotide differences in the protein’s gene may change a person’s susceptibility to COPD.