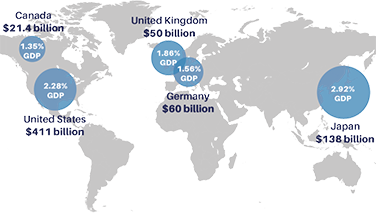 A ResMed-led analysis published in The Lancet Respiratory Medicine (July 2019) estimates that more than 936 million people have obstructive sleep apnea. As summarized in news-medical.net and elsewhere, the estimate from the multinational analysis by ResMed and 12 sleep researchers is nearly 10 times greater than the World Health Organization’s 2007 estimate of more than 100 million.

“More than 85 percent of sleep apnea patients are undiagnosed, meaning hundreds of millions repeatedly suffocate instead of getting healthy, restful sleep each night,” said Carlos M. Nunez, M.D., study coauthor and ResMed’s chief medical officer. “This raises their risk of workplace and roadway accidents, and can contribute to other significant health problems, such as hypertension, cardiovascular disease, or even poor glucose control for diabetic patients. We know the risks, and now we know the size of the problem is nearly 10 times greater than previously thought. Addressing it starts with screening patients we know to be high-risk.”

Education for clinicians and patients alike can help get more people diagnosed, but Nunez contends that educational component should include a conversation about what constitutes good sleep. “For instance, some believe snoring may simply be a normal feature of how some people sleep, when in fact it’s one of the most important signs for the risk of having sleep apnea,” Nunez said. “With a global prevalence that approaches 1 billion people, patients and physicians need to consider the risks and ask the questions that may ultimately help them sleep and live better. This is no longer a problem that can be treated lightly or ignored.”