The LinkedIn Discussion Group, “SleepDisordersDentistry” has just completed an open discussion on “Anterior Discluding Stop Design, What, Why, When, How and Which… ”. Here is a consensus for all to ponder.

An Anterior Midpoint Stop (AMS) is by virtue of design inherent for certain oral appliances such as the TAP or Lamberg Sleep Well, and can be an option for others such as the Somnodent or Panthera. Keith Thornton’s summary of the rational for using the AMS concept for his TAP appliance provides insight as to benefits associated with the AMS design: 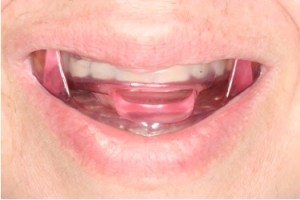 Although Keith is discussing the TAP appliance, this list provides some meaningful rational for an AMS. 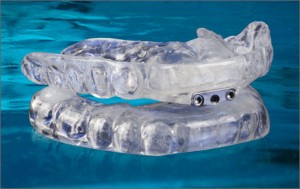 Barry Glassman pointed out that the AMS design results in significantly less muscle activity. The literature supports this concept with EMG studies dating all the way back to Williamson and more recently Hatori (short arch). Barry stressed that AMS does not control the initiation of the centrally mediated parafunctional activity; it simply has the effect of reducing muscle activity and thus reducing the resulting forces imposed on the dentition with parafunction. Particularly important, since almost all of the untoward side effects associated with an OSA appliance are a result of forces fueled by muscle.

When asked whether he ever uses posterior stops, Barry’s response was,

“Many top notch dentists practicing sleep medicine routinely use posterior stops. Clearly they do not seem to have major untoward effects as a result -- and when I use an Oasys, in a maxillary edentulous case, with posterior stops, we do not routinely run into problems as a result. It is interesting to discuss this with Steve Bender, a dear friend who understands anterior midpoint stop theory and was a co-author of a survey we published on over 75,000 uses of anterior midpoint stops concerning their effectiveness and the untoward effects. Steve will tell you that he tends to use no posterior stops -- until a patient demonstrates some discomfort -- and then he adds them. What is happening here, I would propose, is that the particular force vectors, in combination with the patient’s component adaptive capacity, needed to be altered. I am suggesting that the way to minimize this potential, is to decrease the force vectors MAGNITUDE, and to improve the likelihood of the joints not being involved (despite the inaccurate theories proposed that anterior component crush joints), is to use anterior stops from the start. This also, by the way, makes titration much simpler, and allows patient titration without concerns of altered posterior force vectors creating problems.”

Actually, Barry’s approach seems to jive closely with Keith’s post. Of course, by nature of the design of his appliance, Keith starts with AMS on everyone (citing similar reasons to Barry) then adds posterior stops in a small subset of patients when there are problems. Barry feels that adding these posterior stops changes up the force vectors (quantum, direction for example), bringing them within the patient's adaptive capacity to tolerate them. The survey of over 75,000 uses of AMS Barry mentioned was on non-OSA appliances and documented efficacy and untoward effects. Admittedly, a survey, and not a RCT, but considering the number of cases, this review of AMS use provides valuable insights. In terms of non-sleep appliances, those who don't use AMS reported higher levels of occlusal changes as opposed to those who do. Barry pointed out that using AMS concepts in sleep appliances does not create the same forces/mechanisms as it does in the use of parafunctional control only and that with any appliance therapy, informed consent and appropriate risk benefit decision-making is critical. This paper can be found at the following LINK:

Steve Carstensen posed an interesting question, “Since the mandible is already postured forward and open, thus decreasing the mechanical advantage of the closing muscles, I wonder how much difference there would be between that as a 'start' position and any movement further forward or open or laterally from there.”

Barry’s response, “I don't know of any well done study that evaluated EMG activity with and without AMS when the mandible is advanced…I am not aware of any evidence suggesting a decreased mechanical advantage with anterior repositioning…What I can tell you is that we have put EMG's on patients with sleep appliances and proceeded with maximum voluntary clenches with AMS and without and seen the same 75 percent reduction in the Anterior Temporalis and 50 percent reduction in the Masseter. Note: This was not a controlled study, and done in our office -- many times. Now what I never did was compare the EMG potential with natural dentition vs. with the advanced mandible.”

However, not every clinician is a fan of AMS, one stated “trying to reduce force by the use of a stop is counter intuitive”. Others expressed concern about the AMS restricting the tongue from moving forward and out of the airway, increasing vertical more than desired and mandibular anterior tooth discomfort caused by clenching forces. Some clinicians stated that appliances with occlusal rims were more comfortable, ensuring less torque on the anterior teeth and a better distribution of forces.

Adding AMS to the initial appliance design was discussed for patients presenting with a history of bruxism or taking medications that are associated with an increase in bruxism, or having chronic pain or a movement disorder. Adding AMS after the fact to an existing appliance was also discussed for patients experiencing repeated fracture (eg. Dorsal design). As a cautionary note, it was also mentioned that patients with degenerative joint disease would benefit from posterior support as a protective measure for the TMJ.

Concern was expressed regarding the anterior open bite issue associated with the NTI appliance. However, since OSA appliances do not limit their tooth contact to the anterior teeth, there is no reason to believe that this would happen with an OSA appliance, nor did anyone report this occurring. My thoughts are that an NTI appliance leads to a decrease in muscle activity, but does not eliminate it. So, the propensity for occlusal changes have to do with whatever (parafunction) bruxism remains, the force vectors and the fact that these forces are concentrated on the anterior teeth that the appliance touches. However, with a full coverage design, an anterior discluding ramp would not result in the same concentration of forces on those anterior teeth and in fact distribute the forces over the teeth the acrylic is engaging. This is one of my concerns about the new discluding stop on the Panthera. Since the current appliance design does not touch the lower or upper anterior teeth. The forces are translated to the posterior teeth that the appliance engages (with a cantilevered effect). So, is this going to lead to more tooth movement? Something we will have to monitor. Regardless, once again, Panthera leads the way with innovation in the 3D printed nylon appliance department, with addition of the AMS design to their lineup.

Kent Smith discussed that his primary concern is patient comfort, which he believes relates to adherence to therapy. Consequently, he prefers a minimal vertical opening, which is not congruent with AMS design. However, he does place one when dealing with a prior NTI patient. He likes the MicrO2 appliance due to its minimal vertical, and uses a 2mm George Gauge bite fork when taking the bite for this appliance in order to ensure a minimal vertical opening. However, he limits use of the MicrO2 to milder cases due to limited titratability.

Steve Lamberg discussed the design features of the AMS on his Lamberg Sleep Well appliance,

Shouresh Charkhandeh uses AMS less than 10% of the time, his rational for use,

Using signs and symptoms as criteria, if Shouresh determines the possible need for AMS, he prescribes an acrylic appliance so that AMS can be added if necessary. When asked why he does not use it all the time up front, he responded,

“ I personally like to have a full-balanced occlusion in my appliances if possible. That is always my first choice. I do use TENS as well in some of the cases and like the appliance to be made to that exact position

I want the option of using appliances like Narval/Panthera

Vertical Opening limitation - typically a more open vertical would be required for "ADR" and in some cases that could interfere with "lip competency".

Finally, Tony Soileau shared with us that he experienced occlusal changes when using AMS. However, since he added physiotherapy (deep tissue massage, acupressure, stretching, yoga, diaphragmatic breathing) to his regular protocol for all sleep patients, these issues seem to have reduced. The theory being that unhappy muscles are the “root” of the problem. Tony says,

“Damage from years of clenching, poor posture, work environment, etc has the patients entire body in a knot. Once you start to "untangle" the knot, the posture, head position, bite, etc will change; easy to blame it on the appliance. We start with the muscle therapy the day we take the bite.”

In summary, there is literature evidence that AMS reduces muscular activity when using anterior midpoint stop appliances. However, to understand exactly how this applies to OSA appliances that cover the entire dentition and advance the mandible, we can only rely on anecdotal and case study evidence. Barry Glassman has evaluated this in “many” patients and has documented similar reduction in muscle activity. Consequently, AMS is his default design for OSA appliances, resorting to placement of posterior stops only when patients are having difficulties. His explanation as to what the posterior stops do, “the particular force vectors in combination with the patient’s component adaptive capacity needed to be altered”, with the intention of bringing them within the patient’s adaptive capacity.

Of course, there are advantages to not having posterior contact, such as facilitating appliance advancement and providing lateral tongue space. However, there are those that prefer the stability of a full occlusal rim and feel that the anterior discluding ramp may interfere with where the tongue may want to be. Other factors deterring the exclusive use of AMS is the increase in vertical it requires and the inability to stabilize a jaw to a particular “TENS” determined posture. Finally, there is the concern of providing appropriate TMJ support for those with degenerative joint disease. Barry’s comment regarding this concern follows,

“There is a common misunderstanding that without posterior stops, the loading will increase, this is based on a mechanical model that is not accurate and does not look at the force vectors created by the elevator muscles.”

When asked, “When is it appropriate to use AMS on an OSA appliance? in typical “Barry Talk”, his response was “Only when you want less forces during parafunction, Just Sayn ;)”

Some clinicians start off with AMS and add posterior stops in a subset of patients when necessary, yet other clinicians start off without AMS and add it in a subset of patients when necessary. Interestingly, these are top clinicians that are all taking very good care of their patients. Clearly, there is a need for some good studies here. Similar to many other aspects of Sleep Disorders Dentistry, we have different approaches resulting in good outcomes. Sharing these opinions and keeping an open mind can only make us better clinicians. Once again, I would like to express a heartfelt thanks to all that participated in this discussion. As always, these consensus articles should be considered working documents, meant to guide those clinicians beginning in this field and also present some valuable insights to those of us that have been at it a while. I look forward to future discussions on our SleepDisordersDentistry LinkedIn group!

« Combination CPAP and OAD is Here to Stay
Disease management the future of OSA and TMD therapy? »
Copyright © American Sleep and Breathing Academy