POSITIONAL APNEA IN A 73-YEAR OLD MALE WITH ATRIAL FIBRILLATION

This is the case of a 73-year old male who was diagnosed by the local heart institute with atrial fibrillation. The patient was under outpatient care of both a cardiologist and family doctor.Bed partner interview did not report a history of snoring nor any history of breathing difficulties during the night. However, the patient reported awakening nightly around 0300 to 0400 with the inability to return to sleep because of height- ened arousal. The patient underwent a procedure at the heart institute which induced normal cardiac sinus rhythm, but atrial fibrillation returned within two weeks. The patient is currently taking Coumadine (warfarin). Based on this history, and the known association between obstructive sleep apnea and atrial fibrillation,1 the patient agreed to a simple home sleep apnea screening test using the MediByte Jr.

The MediByte Jr. is an easy-to-use Type 3 home sleep apnea recorder which complies with new guidelines by using the same technology in the comfort and convenience of the home as is used in sleep laboratories worldwide. The MediByte Jr. records blood oxygenation and pulse rate using transmission SpO2, oro- nasal airflow via internal pressure transducer, snoring vibrations from airflow, thoracic respiratory effort using RIP technology, and importantly, body position. The raw data is fully disclosed, identical to that recorded in sleep labs, and there is no data processing using proprietary black-box algorithms. The device is capable of recording for one nine-hour night or two consecutive nine-hour nights. Cost per study is approximately seven dollars and published data have found high sensitivity, specificity and correlations of 0.92 between the MediByte and PSG.2

A registered polysomnographic technologist (RPSGT) spent approximately seven minutes instructing the patient in how to apply the MediByte Jr recorder and biosensors. All home sleep apnea data was scored by an RPSGT using scoring guidelines published by the American Academy of Sleep Medicine.3 Total recording time for the baseline night was six hours and 45 minutes. Contrary to subjective reports, the patient had severe obstructive apneas and hypopneas while supine, but was within normal limits during nonsupine sleep. The supine respiratory disturbance index (RDI) was 45.5 and the nonsupine RDI was 1.5 (see Figure 1). The patient slept 49.2% of the night sleeping on his back. Although time between 90% to 100% SpO2 was 99.9% of the entire night, there were 112 SpO2 desaturations of ␣ 4%. The results of the study were explained to the patient and also provided to both the family doctor and cardiologist. Treatment options were discussed with the patient. The patient had no desire to use CPAP therapy and opted to initially attempt positional treatment. 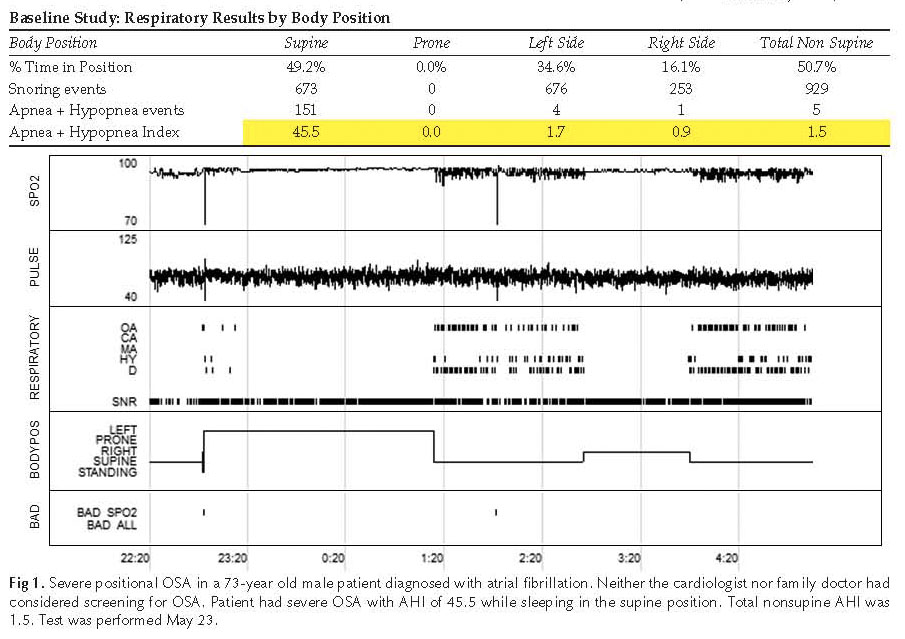 Positional therapy involved sewing two street hockey balls (cost about three dollars) into the back of a shirt. Positive feedback about treatment was received from the patient during a follow-up phone call 72-hours post baseline recording. The patient reported he was now sleeping through the night awakening at 0600 rather than during the middle of night. A subsequent home sleep apnea recording with treatment was performed approxi- mately three weeks after the baseline test. It was originally hoped that the positional treatment would reduce the RDI to a mild or moderate level, at which point therapy could be combined with oral appliance treatment (the patient was adamantly opposed to CPAP therapy). However, the results of treatment were striking in their effectiveness and are shown in Figure 2. Total recording time was six hours and 19 minutes. The supine respiratory disturbance index (RDI) dropped to 0.0 (from a baseline of 45.5) with the patient spending 0% of the night sleeping on his back. Total nonsupine RDI was 4.0 which was within normal limits. Time between 90% to 100% SpO2 was 100% of the entire night, but more importantly the number of SpO2 desaturations of ␣ 4% plummeted to one (from a baseline of 112). The patient reported better sleep, increased energy, and overall satisfaction with treatment. Additional follow-up recordings will be performed to monitor continued treatment success. 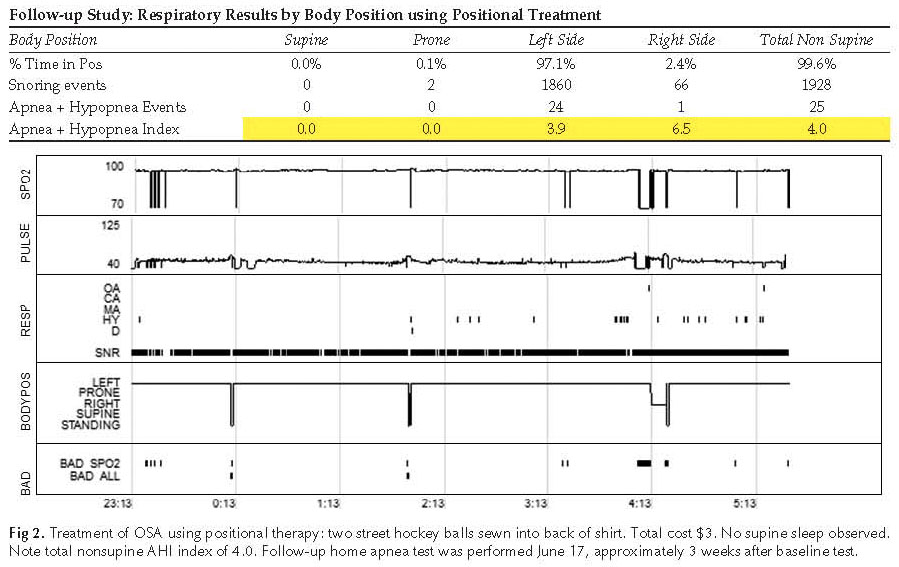 This case study illustrates the cost-effective approach to successful home sleep apnea screening. It also shows the vital importance of recording body position and how subjective reports may be qualified using objective, empirical data. Home diagnosis and monitoring of` sleep apnea is a valid tool which should be used with a suitable patient population to extend sleep medicine practice into the community. The successful outcomes associated with positional therapy are not surprising, and are consistent with a recent study which concluded “positional therapy is equivalent to CPAP at normalizing the AHI in patients with positional OSA, with similar effects on sleep quality and nocturnal oxygenation.”

SlumberBump is a very simple device that is worn around the chest to help position the patient on their side while sleeping. Studies indicate that positional therapy is as effective as CPAP in mild sleep apnea patients. More info on slumberbump can be requested at ProPlayer Health.