The Jet Stream Roy Green was one of the last stars of the St. Louis Cardinals and the first stars of the Arizona Cardinals. His respect was earned across the league by his ability to not just start, but dominate on offense and on defense. His speed was among the worldly elite and his “football IQ” was top notch. The American Sleep and Breathing Academy (ASBA) is proud to congratulate its biggest advocate who boasts a 100% attendance rate for every ASBA event, Mr. Roy Green, for entering the Cardinals Ring of Honor on October 2, 2016. He joins 15 other Cardinals immortals, but is the first to have played on both the St. Louis Cardinals and the Arizona Cardinals.

After he was notified by Michael Bidwell, President AZ Cardinals, he reflected by saying, “He [Michael Bidwell] appreciates those days in St. Louis as well as I do,” Green said. “That’s where it all starts. It’ll never be forgotten, particularly for me. I still have a lot of friends, acquaintances there. It’s where my daughters had their memories as young kids. It’s very important — the linkage between the two — for me.”

Since being retired from the NFL, Roy Green has shifted his focus to helping improve the well-being of current and former professional athletes through promoting sleep apnea awareness across the country. He has teamed up with David Gergen, Executive Director of the American Sleep and Breathing Academy, and a company called Pro Player Health Alliance to hold free public awareness events and private player health screenings in communities all over the nation. After becoming a member of Pro Player Health Alliance and using his extensive amount of connections to players, he has helped get over 1,600 former players successfully tested and/or treated for obstructive sleep apnea.

Green’s career statisctics are spectacular: 559 catches for 8,965 yards and 66 touchdowns. He topped 1,000 yards receiving in 1983 and 1984 in St. Louis, and 1988 in Arizona. As a rookie in ’79, his 106-yard kickoff return for a touchdown was a league record, only to be tied by AZ Cardinals RB David Johnson a year ago. His best year was 1983 when he caught 78 passes for 1,555 yards and 12 TDs. At the time, that yardage total was third-highest in NFL history. Hall of Fame coach John Madden called him not just the best wide receiver in the game, but the best player. 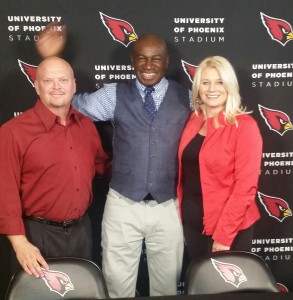 “What he’s done on the football field pales in comparison to what he’s done for players’ health,” says Gergen. “And I’ve always been one of his biggest fans, so that says a lot about Roy as a person. What he has done for the ASBA, helping us fulfill our mission of spreading awareness to everyone, members of this academy and the professional athletes nationwide we can’t thank him enough. ”

« The ASBA Recently Spoke at the House of Representatives on Oral Appliance Therapy
The Next ASBA Study Club Has Been Announced! Reserve Your Seat Before They Are Filled! »
Copyright © American Sleep and Breathing Academy