December 04 1982... David Gergen rolled out of bed and had his career “aha” moment. Gergen knew he was going to save lives around the world, but oddly enough it was going to be through a dental career... 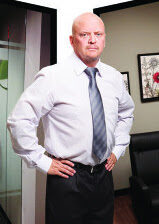 At this point in time Gergen had built one of the most successful dental labs in the World. He revolutionized the sleep industry through oral appliances therapy and new training programs to educate the dentist about their unique value in sleep medicine and because of his innovations, Gergen was being awarded as a top dental technician year after year. Awarded by Columbus Dental, Gelb, ASBA, etc. He is regarded as the world’s most famous dental technician.

For more than 30 years, Gergen spent the fall coaching football and that is where he learned many of his life lessons. It comes as no surprise that Gergen, father of nine children, would focus a good deal of his professional life helping young adults achieve their goals. Gergen worked to straighten teeth for cosmetic reasons, and to help create functional oral structures for patients with severe trauma or developmental issues. Gergen works with Dr. Paul Serrano at the Barros Neurological Institute assisting brain surgeons to reconstruct facial anatomy after the tumor has been removed.

David Gergen has not had your typical career as a dental professional! Due to his efforts in the sleep industry, attention has turned to the effects of poor jaw position on children. “A small airway often forces children to breathe through their mouth and posture their head forward resulting in rounded shoulders and back problems,” explains Gergen. “Continuing this position over many years will create permanent changes in posture. Poor breathing habits and can result in heart and lung problems later in life.”

After 30 years of establishing better jaw and tooth function through orthodontics, Gergen decided that he was going to focus on the airway. His pediatric sleep appliance is a direct result of all of this experience and experimentation. Despite the growing evidence, Gergen laments that, “some physicians still believe that oral appliances are ineffective for treating OSA. Gergen has stated “as a dental sleep industry, I don’t think we’ve done a good enough job educating the public and physicians.”

Gergen’s pediatric sleep appliance is worn on the child’s upper and lower teeth and gives dentists an opportunity to guide the growth of the child’s arch forms and teeth alignment — more importantly, the airway. Expansion of the upper jaw will create more room for the tongue to posture forward and create a more open airway.

“The simple shape and construction of the lower appliance will help stage the growth of the child’s teeth allowing the dentist to control the growth rates of the teeth for maximum cosmetic and palliative effect,” enthuses Gergen. “One of the best parts of the treatment is that all the time this growth is being controlled, the jaw is held slightly forward creating an open airway leading to better and deeper sleep patterns.”Children undergoing orthodontic care have noticed many positive changes for example, stopped bed wetting, improved child behavior and grades. Today, experts have measured the improved sleep patterns and the increase in airway size that comes from a better jaw position. These patients breathe better at night and wake up better prepared to deal with the demands of the day.

When Gergen decided to change the world of sleep medicine, it seemed like something outside the realm of possibility. How could a dental professional change the sleep industry?, In 2008 Gergen created a new company, the Pro Player Health Alliance (PPHA) working with NFL greats and the Living Heart Foundation (LHF). PPHA was created to treat the sleep health needs of retired NFL players and to educate the physicians about the importance of dentists and dental devices for OSA therapy. Through Gergens success with the NFLPA, he was able to utilize sporting icons to help spread awareness of sleep apnea as a silent killer in the general population.” The reason we are the best is simple… the Team! Gergen could have easily sat back and enjoyed the fruits of his businesses, but instead he spends his time and resources promoting education and awareness about sleep disorders.

In August 2011, David Gergen’s first dental sleep program was presented to a group of 25 doctors in Sonoma, CA. Because of Gergen today there are sleep programs every single weekend. That same year David Gergen was approached by a medical sleep academy to be their dental sleep director. It was going to be the world’s first multiple disciplinary academy called America Sleep and Breathing Academy.”

Gergen will remain at the center of these programs. He will be building teams, asking hard questions, and the sleep industry will be better for it. He will be presenting at this year's in-person Sleep & Wellness annual conference in July.”

David Gergen will be speaking at the 2021 Sleep and Wellness Conference. Click Here for More Information