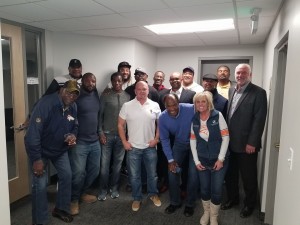 November 20, 2017 saw Pro Player Health Alliance (PPHA) host another of their sleep apnea awareness events. This time it was at the office of Dr. Steve Wilk, DDS. Dr. Wilk had previously attended a Living Heart Foundation screening at Centura Hospital that had approximately 60 former NFL players get screened for sleep disorders. The event was so successful, some of the players agreed to return and share their testimonies at Dr. Wilk’s public awareness event at The Viewhouse.

It was incredibly rewarding meeting people who truly needed care with their sleep apnea come to our event. Some also brought cards and photos for the players to sign. Everyone had a great time and Dr. Wilk used the event to reach out to members of the local community who are seeking treatment for their OSA. David Gergen, CEO of the American Sleep and Breathing Academy (ASBA), Pro Player Health Alliance (PPHA) and Gergen’s Orthodontic Lab, flew out to Denver, CO for a 3rd time on behalf of the former players. “ESPN and NBC were there to cover the event, and it is working well, while also getting better each and every time. I’m excited for our next event.” says Gergen.

He and Dr. Wilk’s Denver Sleep Apnea Center team greeted the former NFL players and current Broncos lineman Billy Turner who gathered to learn about the dental and sleep benefits they receive from the time they spent playing football in the NFL. “Back in the day, these players were really beat up,” said Wilk. “These are really big men, and while we hear about concussions now, they have a lot of other health issues.” 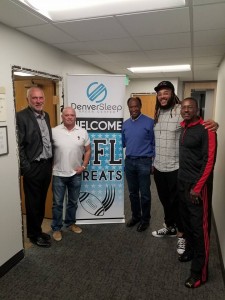 Wilk, who is a Diplomate of the American Sleep and Breathing Academy, has been called a “life-saver” by his patients. With over 2800 hours of continued education and decades of experience in treating patients for sleep, TMD and dentistry, Dr. Wilk is one of the country’s most experienced and educated dentists. After becoming involved in the Denver area with Pro Player Health Alliance and treating the retired NFL players for dental and sleep apnea needs, one of the players joked, "Word has quickly spread with how friendly and efficient Dr. Wilk and team are; now he's starting to get fans of his own."

To learn more about the ASBA, membership, diplomacy or future events, email info@myasba.com or call 602-478-9713.