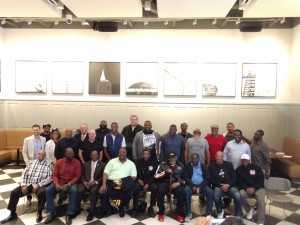 On December 8, 2017 David Gergen, CEO of Pro Player Health Alliance (PPHA) and the American Sleep and Breathing Academy (ASBA), was invited to a meeting organized by the NFLPA L.A. Chapter and its President, Frank Rice. The meeting was held at Hollywood Park Casino in Inglewood, California, just southwest of Los Angeles. Former NFL great and U.S. Olympian Ron Brown said, “This was one of the best turnouts we have seen at our chapter meetings in a long time.” According to other players in attendance, there were excellent reasons for that outcome: included in the meeting topics were sleep apnea treatments and dental benefits for retired NFL players.

David Gergen mentioned, “Frank invited me to his meeting because of my previous experiences with helping the former players across the country. I invited two of the ASBA’s Diplomates who are already treating some of the former players for their sleep apnea needs, Dr. Dian Olah and Dr. Alex Kalmanovich, to the meeting.”

The meeting room was packed full with former players including Mike Haynes, who currently serves on the Board of the Greater Good Fund. Mike spoke about the dental benefits the players receive through the Greater Good Fund and touched on his experience being treated with sleep apnea. “I had fewer than ten apneic episodes an hour, but I hear of so many guys who have 40, 50 or more an hour. I have my appliance and it’s made a huge difference in my quality of sleep. You need to get yours too,” he explained to the group. 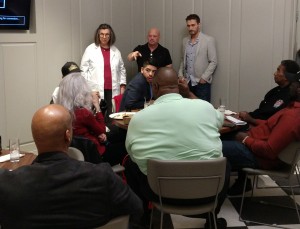 After Mike Haynes spoke, the Dream Team was presented on the stage. Many think of the Dream Team as the 1992 U.S. Olympic Basketball team but in this case it was Dr. Dian Olah and her staff. Dr. Olah’s practice, The Dream Team Sleep Center, has been the go-to office for many of the former players in the Beverly Hills and surrounding area for the past year. She was able to explain the short version of sleep apnea treatment for the players. “We can give you a very simple written screener form to see if you are at high risk of having sleep apnea and if you are, we can give you a take home test. The take home test is a small device that will record data during the night, in your own bed, and is used to verify if you have sleep apnea or not.”

Overall, the players were happy with the outcome of the event. Each and every person expressed the importance of having Dr. Olah and Dr. Kalmanovich in attendance. One former player said, “It’s always nice knowing that your doctor really cares about you. That means a lot seeing Dr. Kalmanovich and Dr. Olah here in person on their night off. Those are the doctors we’re going to see.”