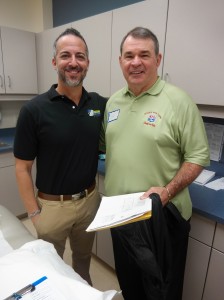 The relationship has led to real benefits for NFL players while continuing to raise awareness among the general public, many of whom pay attention to the actions of their grid-iron heroes. Ronald Rosenbaum, DMD, PA, helped foster that ASBA/NFLPA relationship at last month’s Pro Bowl game.

As a veteran private practice dentist, Rosenbaum discovered dental sleep medicine a few years ago, and it quickly became his passion. With ASBA Diplomate status secured, Rosenbaum got the invite to the 2018 Pro Bowl and eventually took impressions for 25 NFL players at the nearby University of Central Florida’s medical facility during the same day health screening event.

“David Gergen [CEO of the ASBA] is trying to help these ex-NFL players to breathe better, live better, and improve their quality of life,” says Rosenbaum, owner of Cosmetic, Restorative & Preventive Dentistry, Pembroke Pines, Fla. “About 70 players rotated through, and only one said, ‘I don’t want this. I don’t think I have sleep apnea.’ The rest were open, honest, and receptive. In their screening questionnaires, we could see their numbers. We did not expect to take 25 impressions, but they know that oral appliances work.”

Rosenbaum called the overall experience “wonderful” and described the players as “big teddy bears who wanted to feel better and have more energy, because a lot of them were lethargic.” Rosenbaum acknowledges that “CPAP works” but says, “most will not wear it, and even when they do wear it, it can get leaks, and patients can develop issues. It can be good at first and then turn bad. The oral appliance is the best thing for these guys, especially the football players.”

Recently, Rosenbaum has been working with Sleep Group Solutions (SGS) and Rani Ben-David, SGS’ president and founder, using the pharyngometer to measure the airway. “We also test the nasal cavity,” says Rosenbaum, who intends to continue lecturing on behalf of SGS in 2018 and beyond.

“In just a matter of 5 hours I added 25 retired NFL players as patients to my sleep practice. The screening was organized, professional and beyond what I expected. Having the screening inside the Health Center at University of Central Florida was the cherry on top. Taking my staff to the Sleep Group Solutions/ASBA Boot Camp was the best decision I could have made; I heard awesome feedback from other doctors about my staff. This is one of the most exciting things I’ve done in years and I highly recommend all of my colleagues to join the ASBA, attend the annual meeting and bring your staff for the boot camp.  It’s fun, exciting and financially rewarding. These NFL players are amazing to work with,” said Dr. Rosenbaum. "Next is Project Rose. I've talked with a couple of the guys within Project Rose and the numbers are astounding. Project Rose is going to change dental sleep medicine not only am I excited to help more people with oral appliances, I'm definitely ready for the payout as well."

To register for the ASBA Annual Meeting and add your staff to the Boot Camp, visit sleep-conference.com.

« ASBA campaign for “Dental Sleep Medicine Expert to the Medical Review Board” appointment
Teachers and Diplomates: “Who Practice What They Teach” »
Copyright © American Sleep and Breathing Academy