Teachers and Diplomates: “Who Practice What They Teach” 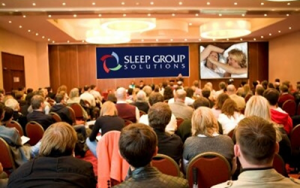 Rani Ben-David, president and founder of Sleep Group Solutions (SGS), Hollywood, Fla, wants SGS seminar attendees to learn from the best, particularly from those who actually practice dental sleep medicine. “Most of the SGS speakers/teachers are diplomates of the American Sleep and Breathing Academy [ASBA],” says Ben-David.

“They are not merely dentists who read studies then come and teach. They practice what they teach.”

Offering about 90 dental seminars per year in the United States and Canada, the 13-year-old SGS recently decided to use mostly ASBA diplomates to teach its courses in 2018. The decision comes from a need to tap into the diplomates’ expertise, as well as an appreciation for the overall tone set by the ASBA.

“The ASBA is a down to earth academy,” says Ben-David. “The board members and everyone involved are so connected. The diplomates are genuinely helpful. Last year when I went to the ASBA conference, the lectures were top of the line and the subjects were great. All the diplomates, board members, and executives were welcoming to the new doctors and new people. It feels like they want to help the other members succeed, and that’s how an association/academy should conduct its business. There is no feeling of being an ‘outsider’ with the ASBA.”

Ben-David hopes more members will ultimately join the ASBA as a natural byproduct of the seminars based largely on that welcoming atmosphere. “When someone comes to a new association, they can feel like outsiders,” explains Ben-David. “However, at the ASBA, new doctors are welcomed by board members, welcomed by the CEO [David Gergen], the president [Kent Smith, DDS], and Alan Hickey, the executive director who helps run the association.”

ASBA diplomates are as experienced on the business side as they are on the clinical side, an aspect of the educational process that should never be neglected.

Ben-David puts it this way: “These docs are highly successful, and they are there to save patients’ lives. It’s important that new docs who come to SGS seminars see that lecturers are diplomates in a reputable academy like ASBA. Fortunately, the future is bright. I have sleep docs and ENTs asking me, ‘Where can we find dentists who treats sleep apnea?’ It’s not going to stop. Dental sleep medicine is only going to grow.”