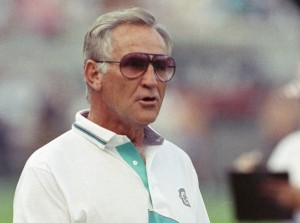 Miami Dolphins coaching legend Don Shula was hospitalized overnight May 3, 2016 after suffering from fluid retention and sleep apnea, according to his wife in a statement released by the team. It was confirmed to NFL Media that the 86 year old was treated and discharged by the Aventura Hospital and Medical Center Tuesday.

"Coach Shula has been admitted to the hospital due to fluid retention and sleep apnea," Mary Anne Shula stated. "The family is looking for a speedy recovery." Shula is considered the most successful coach in NFL history with countless accolades. He won two Super Bowls with the Dolphins and won six NFL Coach of the Year honors during his 33-year head coaching career. Inducted into the Pro Football Hall of Fame in 1997, Shula holds coaching records for most regular-season wins, most career wins and Super Bowl appearances. He is also the owner of a successful chain of steakhouses throughout the country named “Shula’s Steakhouse”.
.
Dr. Rod Willey, an American Sleep and Breathing Academy Diplomate and the largest stand-alone dental practitioner in the US who screens and treats patients for snoring and sleep apnea says, “I am pleased to hear his sleep apnea treatment went well. I remember a few years ago when the Pro Player Health Alliance, lead by David Gergen and an NFL great Roy Green, educated the Dolphins on the effects of untreated sleep apnea. Their efforts to educate the players are certainly being heard and are echoing throughout the communities that follow them. Nearly 25 million people remain undiagnosed with sleep apnea. The Pro Player Health Alliance and the American Sleep and Breathing Academy are working hard to change that. Sleep apnea contributed to the premature death of star Green Bay Packers defensive end Reggie White in 2004 as well.”