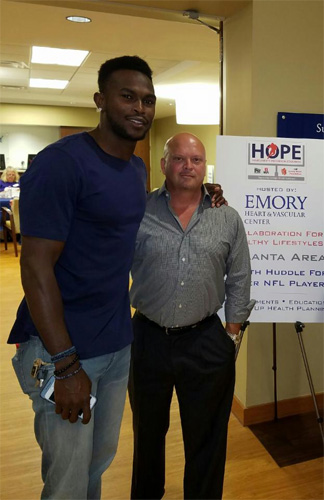 It is no secret that the American Sleep and Breathing Academy (ASBA) is the exclusive academy chosen to work with the NFL Retired Players Association (NFLPA) chapters of America to screen and treat current/former NFL players for obstructive sleep apnea. These screenings have seen anywhere from 21-63 oral appliance candidates who are directly referred to the ASBA dentist chosen in that area. Most recently, over fifty former players arrived at the screening Saturday, 7/23/16 in Atlanta at the Emory Saint Joseph’s Hospital. The event that was planned by Pro Player Health Alliance, Living Heart Foundation and the NFLPA saw coverage from FOX and ESPN. Super stars Julio Jones, Roy Green and Roddy White were only a few of the health advocates who dedicated their time.

David Gergen, Cardinals Hall of Fame Roy Green and Matt Fish, Phoenix Chapter President of the NBRPA met in Phoenix, AZ  recently to discuss health improvement plans for retired NBA players. The plans will include health evaluations and incorporating testing/treatment for sleep disordered breathing into overall health evaluation programs. The NBPA, which provides funding to the NBRPA, also approved funding for former NBA players' healthcare- this means almost every player referred from the screenings will have insurance. Upcoming meetings are already scheduled in the NBRPA, meaning PPHA will select a dentist to oversee the dental sleep medicine portion of the screenings in the coming months. With the first health evaluation for retired NBA players being located in Phoenix, AZ, PPHA will be reviewing Arizona dentists who are Diplomates in the American Sleep and Breathing Academy.

In collaboration with PPHA, the chosen dentists will have the opportunity to treat former NBA players for obstructive sleep apnea with oral appliance therapy when medically indicated and after being properly tested for the sleeping disorder according to state guidelines. The dentists that are selected will also be featured in the official magazine of the retired NBA, “Rebound Magazine” and the official magazine of the American Sleep and Breathing Academy, “Sleep and Wellness Magazine”. Rebound Magazine reaches over 250,000 elite readers and grows each issue. These include team executives, season ticket holders, current/former NBA, WNBA, ABA, Harlem Globetrotter players, NBA and team executives, NBA team owners and NBA Season Ticket Holders.

To learn more about how to become involved with the Pro Player Health Alliance and treat retired NBA/NFL players call David Gergen at 602-478-9713.