David Gergen President of the ProPlayer Health alliance and executive director of the American sleep and breathing academy lead the team to victory last Tuesday night in Phoenix Arizona. Initially the idea of NFL football, Sleep Apnea and the Phoenix Police foundation don’t seem to fit together very well. It is important to understand that Sleep Apnea is a pervasive disorder that affects all walks of life and whose impact on performance at every level is real and measurable.

Sleep apnea affects over 20% of the US population and unfortunately elevated body mass is a big part of the condition. The condition reached prominence with the death of Reggie White at age 43 he was a 13 time pro bowler who played at weights topping 290 pounds it was his size that put him in a group susceptible to sleep apnea. A study in the New England Journal of Medicine found linemen accounted for 85% of sleep apnea cases among the more than 300 NFL players tested. Sleep 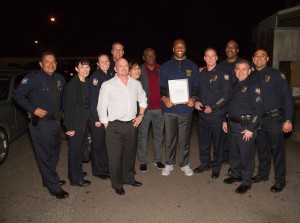 apnea is considered by some to be an occupational hazard for NFL linemen.

So what is the connection with the Police force? After Studying 5,296 law enforcement officers in North America, a Harvard Medical school group reported that 40% of active duty officers suffered from sleep abnormalities. These include Apnea, Insomnia, shift work disorders, restless legs syndrome and narcolepsy. Yet sleep disorders in cops often go undiagnosed and largely untreated, according to Dr. Rudi Ferrate. For example, “almost half the individuals diagnosed with obstructive sleep apnea [a dangerous condition in which impaired breathing can lead to a heart attack or stroke] do not regularly take treatment,” he says.

The sleep apnea event Padre Murphy’s in Phoenix January 26th 2016 was really a triumph of timing and execution. The Arizona Cardinals football team and its Executive Director and owner Nicole Bidwill chose to cosponsor a public sleep apnea awareness event with the ProPlayer health alliance and the Phoenix Police foundation. The publicity for the event was electric, driven by a season that saw the Cardinals win a franchise high 13 regular season games and earned their third NFC West division title. Cardinal superstar Larry Fitzgerald and Retired Cardinal Roy Green lead the event with David Gergen.

I have been attending sleep apnea events for over 20 years and have never seen more than 400 people (and that was a ProPlayer Health Alliance event in Tacoma Washington). Imagine my surprise when I arrived at the event in Phoenix and saw crowd control in the parking lot and out on the street. There was a huge parking lot overflowing with cars and people thronging into Padre Murphy’s Sports Grill. The Phoenix Police reported that there were over 3000 people in attendance. The main area was so packed that people were being turned away at the door. At a certain point entrance to the parking lot was blocked off to new traffic.

Inside the event everyone was excited to see Larry Fitzgerald and Roy Green. David Gergen in his roll as Master of Ceremonies was moving things along and the crowd seemed to really be enjoying themselves especially when they had the opportunity to get an autograph or participate in the phoenix Police Foundation auction (which offered many great autographed items).

This was a huge night with many great moments. A few of my favorites were when Phoenix Police Chief Joseph Yahner presented Larry Fitzgerald and Roy Green with honorary Police officer awards. The crowd yelled Larry…Larry…Larry and surged forward sparking some concerned glances by security however the mood was great and everyone was having a great time.

Mark Brnovich Arizona Attorney General who wears and oral appliance for his sleep apnea and Secretary of Transportation Alberto Gutier were also in attendance and wanted to make sure that the everyone understood the perils of sleepy driving and the importance to public safety of a good and restful night’s sleep. They are very impressed with the Sleep Herbst as an alternative to CPAP for commercial drivers including emergency response.

I was very impressed to learn that 8 of the 40 Phoenix police officers made appointments with ASBA diplomate Mark Castle at Koala of Arrowhead, to be treated for their sleep apnea

In Summary I think this event was really important milestone in the education of the public to the dangers of sleep apnea. The NFL players current and retired certainly had a great event. I understand from David Gergen Roy Green that he and Nicole Bidwill are in fact working on another sleep apnea event to kick off the 2016 season. I also heard that other teams around the league are considering adding sleep apnea awareness to their calendar. Congratulations to David Gergen and Roy Green for planning an excellent event that I’m sure laid a foundation for bigger and better public education events in the future.