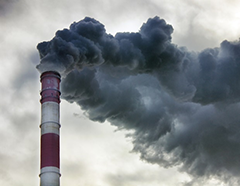 The ill effects of air pollution may literally be causing some people to lose sleep, according to new research published online in the Annals of the American Thoracic Society.

In “The Association of Ambient Air Pollution with Sleep Apnea: The Multi-Ethnic Study of Atherosclerosis,” Martha E. Billings, MD, MSc, and co-authors report a link between obstructive sleep apnea and increases in two of the most common air pollutants: fine particulate pollution, known as PM2.5, and nitrogen dioxide (NO2), a traffic-related pollutant.

Researchers analyzed data from 1,974 participants in the Multi-Ethnic Study of Atherosclerosis (MESA) who also enrolled in both MESA’s Sleep and Air Pollution studies.

The study found a participant’s odds of having sleep apnea increased by: