There may be 35 million older Americans with undiagnosed lung disease due to cigarette smoking, a new study suggests. 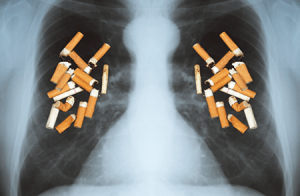 They don’t meet the criteria for a diagnosis of chronic obstructive pulmonary disease (COPD), but they still suffer significant lung disease and impairment, the researchers report in JAMA Internal Medicine.

“We think we can increase their quality of life by treating them before they get worse,” said Dr. James Crapo, the study’s senior author from National Jewish Health in Denver.

Currently, about half of U.S. residents age 49 and older are current or former cigarette smokers, the researchers write.

About one in five U.S. adults currently smoke.

COPD, the third leading cause of death in the U.S., is often related to smoking, they add. The disease worsens with age and makes it more and more difficult to breathe.

Typically, the condition is diagnosed through spirometry, which measures lung function. But Crapo points out that lung function can be impaired to lesser degrees before people qualify for a COPD diagnosis.

For the new study, the researchers looked at data from people across the U.S. that had been gathered through spirometry, CT imaging scans of the chest, a walking test and questionnaires.

The researchers compared 4,388 people with normal spirometry tests to 794 people with mild COPD and 108 people who never smoked.

Overall, about 54 percent of people who had normal spirometry scores had signs of lung disease or impairment, the researchers found.

“I think to say they don’t have the disease is wrong,” Crapo said.

Compared to the never smokers, those with normal spirometry but impaired lung function had worse quality of life scores, more trouble walking and evidence of airway thickening and emphysema on their CT scans.