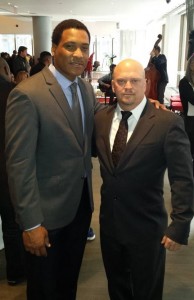 Proper Sleep is More Than a Curfew

Football players are used to strict curfew guidelines, largely designed to ensure the proper amount of sleep. And yet, lying in bed with eyes closed does not necessarily lead to clinically proper sleep. In some situations, it can be quite the opposite. The story of defensive end Reggie White, in particular, has become a cautionary tale on the hazards of obstructive sleep apnea (OSA), a disorder characterized by complete or partial obstruction of the upper airway.

At the time of his retirement in 2000, the 6-ft 5-inch “minister of defense” had 198 sacks, the most in the history of the game (since eclipsed by Bruce Smith’s 200 sacks). When White died at the age of 43 in 2004, the official cause of death was cardiac issues, with OSA listed as a contributor. White's wife cared about the topic so deeply that she helped start the Reggie White Sleep Disorders Research and Education Foundation after her husband’s death.

During OSA episodes, shallow or paused breathing can lead to reduced blood oxygen saturation, which is measured as an apnea hypopnea index (AHI) during sleep tests. Physicians agree that a high AHI degrades organ function over time, which can eventually contribute to premature death. Reduced energy during the day is another obvious result of poor sleep. Those with high AHI numbers are literally waking up several times per hour, making restorative sleep impossible. The goal of sleep apnea treatment is to reduce the AHI number to single digits, or even zero.

For current players, sleep apnea can translate into poor performance on the field, which could lead to less money on the next contract, not to mention a less healthy body. “Consider that NFL players seek out every edge they can to capitalize on what amounts to short and lucrative careers,” says David Gergen, CEO of the American Sleep and Breathing Academy (ASBA). “Proper sleep, and avoiding OSA, should be top of mind for current NFL players who are looking to improve their health and better their performance on the field.”

Meanwhile, many ex players who used to throw around their weight to great effect on the field, are often obese after retirement. “Some of those linemen at over 300 pounds stop playing and they have a very high incidence of sleep apnea,” says Harry Sugg, DDS, owner of Dallas-based Wheatland Dental, and a dentist at Project Rose in Tyler, Texas.

“When a player’s athletic career ends, the level of exercise is reduced dramatically while caloric intake often remains high,” adds Andre Collins, executive director of the Professional Athletes Foundation and NFLPA director of Former Players. “This could lead to obesity, along with other serious comorbidities.” 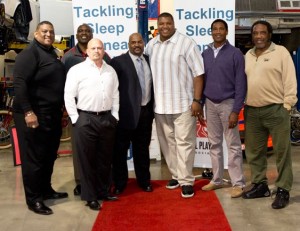 Your Mind, Your Body, Your Health

The NFLPA family has long provided its members (via its Your Mind, Your Body, Your Health program) with the tools to address football-, and non-football-related health concerns. Much like the growing awareness surrounding brain trauma and its long-term effects, the problem of poor sleep is gaining traction in the public eye. Thanks partly to ASBA (in conjunction with Pro Player Health Alliance [PPHA]) events that work closely with current and retired NFL players, members of the public are paying attention because their gridiron heroes are willing to talk about the problems of poor sleep.

Players are eager to talk about OSA because they see the benefits of oral appliance therapy (OAT), particularly OAT that involves the Herbst Appliance. Effective on chronic snoring and mild to moderate OSA sufferers, the appliance allows patients to move laterally and vertically without disengaging the appliance, and very few adjustments are required.

The hard acrylic of the Herbst appliance snaps into place, and when requested, retention clasps can be added and adjusted with telescopic hardware. The Sleep Herbst can be fabricated in hard acrylic, thermo active, or soft/hard materials. Gergen’s Lab and Space Maintainers Lab were the only two labs in 2012 to be Medicare cleared to fabricate these devices, but more labs across the United States are applying for and gaining clearance.

The ASBA’s mission is firmly in line with the NFLPA’s own stated goal to tell real stories and “equip our current and former members and their families with the knowledge needed to tackle tough subjects…and live the healthiest life possible.”

Super Bowl Champion and All Pro offensive lineman, Derek Kennard, went a long way toward living a healthier life when OSA treatment lowered his AHI from 72 to 2. He used some of the extra energy from radically improved slumber to work out more often, eventually losing a whopping 145 pounds.

All pro and two time MVP runner up, Roy Green, who started at wide receiver most of his career and for a few years started both sides of the ball, had three heart attacks and two strokes before being treated with an oral appliance for OSA. Since beginning the treatment, he has had no further heart attacks or strokes. With an AHI that went from 32 to 7 since using the Herbst Appliance, the 60-year-old Green says he feels better than he has in decades.

Green and Gergen have spread the word about OSA through the ASBA-affiliated Pro Player Health Alliance, holding free public awareness events in cities across the United States. Green’s extensive connections, along with his involvement in PPHA, has brought hundreds of former players, and countless NFL fans, to try much-needed OSA treatment. 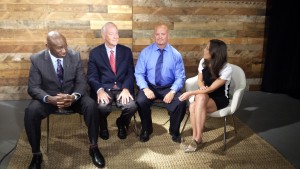 The program’s roots began forming when David Gergen was invited to a coaching camp where former NFL players would be at different football positions helping youth develop their skills in that particular area (lineman, wide receivers, running backs, quarterbacks, defensive backs etc.). David, a state champion head football coach, was chosen to help develop the coaches of youth football teams. He saw Derek Kennard one morning and came to the conclusion that he must have been drinking all night or he had terrible sleep apnea. He then proceeded by getting Derek treated for sleep apnea with oral appliance therapy and during Derek's treatment, Derek's brother died from sleep apnea caused issues. Derek became passionate about it and worked with David Gergen to spread the word to his "NFL brothers". It was after this that the sleep apnea awareness began spreading through the former NFL player community.

Mike Haynes, who is passionate about former player health after defeating prostate cancer, joined the team and began spreading awareness as well. It wasn’t long after that, David Gergen was then introduced to Dr. Archie Roberts (Founder of Living Heart Foundation). Dr. Roberts has been in charge of the Living Heart Foundation health screenings for former players nationwide for many years.

Health evaluations for the players named above began with the Living Heart Foundation’s HOPE Program that was launched in 2012. Roberts added the sleep component after meeting with Gergen, CEO of the Gergen’s Sleep Appliance Lab and PPHA. After treating many of the players across the country and proving through data from sleep tests, Mike Haynes and David Gergen presented the information to Andre Collins (Executive Director in the NFLPA) and together they created the Sleep Apnea Program for Former NFL Players through the "Player Athletes Foundation".

It was eventually made mandatory that doctors be trained through the ASBA to ensure the best OSA treatment for former players. A newly implemented “sleep coordinator course” mandates that at least one member of the doctor’s staff be certified in sleep with special training.

Current and former players who take Your Mind, Your Body, Your Health to heart should not overlook the vital component of proper sleep in a healthy lifestyle. If you are interested in learning more about the sleep program, contact David Gergen at 602-478-9713.