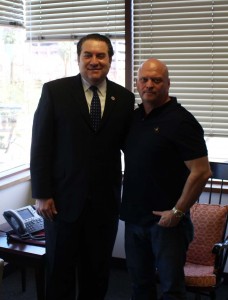 My name is Mark Brnovich (pronounced "Burn-O-Vich"), and I am attorney general for the state of Arizona. I’ll be heading to the American Sleep and Breathing Academy’s (ASBA) “Sleep and Wellness” meeting, scheduled for April 21-22 in Phoenix, AZ, and I look forward to seeing you there.

You may ask: Why does a government lawyer care about sleep medicine? The answer is that poor sleep affects so many aspects of life, particularly when it comes to highway safety. Whether accidents are caused by public vehicles or private cars, they often lead to legal headaches and human misery.

A recent meeting with the CEO of the ASBA, David Gergen, along with the Association’s executive director, Alan Hickey, helped to explain the connection between sleep health, public safety, and my job as a public servant. After conferring with Gergen and Hickey, I’ve decided to make a presentation at the ASBA Meeting. Alberto Gutier, director for the Arizona Governor's Office of Highway Safety (GOHS), will also be speaking.

Officials in Arizona are paying attention to the human toll of poor sleep on the nation’s highways. The job of the GOHS is to develop, promote, and coordinate programs that influence public and private policy by increasing public awareness of highway safety issues. As sleep professionals, you are uniquely qualified to address the sleep component of highway safety.

I’ll be at the ASBA Meeting to let you know our thinking on this topic, but I’ll also be there to learn from you. What policies can we put in place to make Arizona’s highways safer? How can these policies be implemented nationwide? These are valid questions, and I look forward to exploring them with you.

I recently attended a Bob Dylan concert and as Dylan stood there singing "The Times They are a Changin'", I realized that he was right back then and hes right today. The times they are a changing - oral appliances have a bright future in the field of sleep medicine. The very next day I put in a disk of one of my favorite bands, The Grateful Dead, and if we are all going to “just keep truckin’ on,” I want Arizona drivers to do it safely.

Make sure you register for the Sleep and Wellness conference at http://sleep-conference.com

Mark Brnovich is a lawyer and politician from the state of Arizona who currently serves as Attorney General of Arizona. It's the largest law office in Arizona, with approximately 430 attorneys and over 1,000 employees.