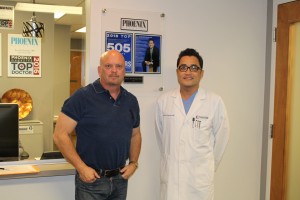 Obstructive sleep apnea is a serious sleep disorder characterized by pauses in breathing, with repeated stops and starts during sleep. According to the National Health Sleep Awareness Project, at least 25 million adults in the US are afflicted with obstructive sleep apnea, a chronic disease that increases the risk of high blood pressure, heart disease, Type 2 diabetes, stroke, depression, obesity and erectile dysfunction.

“Obstructive sleep apnea [OSA] is effecting the health of millions of Americans, and the patient population is not getting any smaller, “according to Dr. Jose “Joel” De Ocampo, MD medical director at Arrowhead Pro Sleep Center and with double board certification from the

American Board of Psychiatry and Neurology and the American Academy of Sleep Medicine.

“The effective treatment of sleep apnea is one of the keys to success as our nation attempts to reduce health care spending and improve chronic disease management.”

Despite the increasing prevalence of OSA, a large majority of patients with this ailment still remain undiagnosed. Arrowhead Pro Sleep, the first Sleep Center of Excellence to be recognized by the Arizona Cardinals, is operating with a brand new model for screening and testing patients.

The goals of Arrowhead Pro Sleep ‘APS’ are to address this need by initiating a screening process for all patients presenting to physicians’ offices, regardless of physician specialty, and to subsequently test and treat all patients who screen positive for OSA.

Working with APS is the Pro Player Health Alliance which was formed so professional athletes suffering from sleep apnea could receive treatment regardless of the players insurance or ability to pay. Derek Kennard [COWBOYS/CARDINALS Center & Guard], co founder of Pro Player Health Alliance ‘PPHA’ was diagnosed with Sleep Apnea and given only one choice of treatment, a CPAP (Continuous Positive Airway Pressure) machine.  After trying his CPAP for a few months Kennard met David Gergen who turned out to be a future co founder of the PPHA.   After conversing for a few minutes and noticing some very dark circles under Kennard’s eyes, Gergen asked Kennard if he was feeling OK.  Kennard followed by saying, “I was just recently diagnosed with Sleep Apnea and the problem is I can’t wear that mask.”  Gergen, who owns Gergen’s Orthodontic Lab, one of the largest manufacturers of dental/sleep appliances in the country informed Kennard that there were other options such as an oral appliance.  Kennard responded with “I will try anything.”  Within one week of this conversation, Kennard was wearing an oral appliance and sleeping through the night.  His Sleep Apnea, which was severe, was completely reduced to

A couple of weeks later, Kennard’s brother who also suffered from sleep apnea, passed away in his sleep with his CPAP sitting on his shelf  (he couldn’t wear “the mask” either).  Kennard called Gergen and told him about his brother saying, “ We can’t sit by and let this keep happening… so many people I know, including many of my brothers from the NFL, are suffering.  We need to help them.”  The PPHA was officially formed the following week.  To date the PPHA is responsible for treatment of over 400 athletes including, icons such as Eric Dickerson [ex LA Rams, Indianapolis Colts Running back] and Roy Green [ex CARDINAL/EAGLES Wide Receiver & Cornerback].

In addition, APS and PPHA hope to increase awareness of treatment options for patients with OSA. “95% of all patients diagnosed with OSA are just given a CPAP as their only option.  “Many patients such as Derek and Eric are simply not able to tolerate a CPAP.  PPHA has done an incredible job of presenting the oral appliance as a great alternative for patients who cannot tolerate CPAP. We at APS are committed to doing the same.”

In addition to his laboratory Gergen is also the CEO for the American Sleep and Breathing Academy.  The Academy puts dentists and physicians together so they can work as a team toward one goal, successful patient treatment.  “For too long the dentists and the oral appliance have been an afterthought in the world of sleep,” said Gergen.  “At the Academy we are opening physicians’ eyes to the success rate of oral appliances.  While CPAP has been the standard for sleep treatment it’s achilles heel is patients don’t use it as much as they should.  There are so many incredible dental practitioners that we know who can help these patients who have been diagnosed and do not know of anything but a CPAP.  Our job at the Academy is to help get these patients treated by letting physicians know that there are other choices available to their patients.  In fact in mild and moderate cases it is the preferred treatment.”

Using the philosophy of mild/moderate OSA patients’, being treated with oral appliances before they ever try a CPAP is one of the new APS programs.  “The program is successful for a few reasons, “Krystal Reynosa, Manager at the sleep center.  “Number one we assist with providing education to both physicians and their patients as to all the possibilities of different sleep treatments.  “Every patient is shown all his or her options.  They are shown demo models of both CPAP and appliances.  They are even given brochures on surgical possibilities, weight loss options, etc.  The sleep physician ultimately recommends which treatment is best for the patient.  By educating the patient and helping with a choice of recommended treatment we have increased the likelihood of patient compliance.”  Number two; we put in a strict follow up protocol where all patients are retested after six months of treatment.  If their treatment is not deemed successful we change the treatment to a different modality.  We keep doing this process until we have exhausted all of the options.  This protocol has led to a documented success rate of over 90%.”

Perhaps the most exciting thing for APS is the ability to work with the NFL’s Arizona Cardinals. “Football players in particular are at risk for sleep apnea a lot of which can be traced to the average neck size of NFL players.  Men whose neck size is 16.5 or larger are more than twice as likely to have sleep apnea as someone with a neck size smaller than 16.5 (for women their neck size should be under 15.)  “Being able to work with athletes such as Roy Green, Eric Dickerson, and Charles Barkley just to name a few is a dream come true for me,” said Reynosa.  To be able to not only work with these incredible athletes but to actually help them become healthy has been an incredible experience for me.  90% of the population who suffer from sleep apnea are not even aware of it, so we are going to work as hard as possible to ensure that screening is being done in as many physician offices across the country as we can.”