ASBA members tent to spend a great deal of time reviewing literature to support clinical and practice management decisions. There is a great deal of peer reviewed information that guides the field of sleep disordered breathing. ASBA Diplomates are very much aware of how rigours of reading and understanding the foundational articles that form the basis for the practice. Bob Stanton Transportation editor for Sleepscholar.com wrote the below article as a rebuttal to an article that appeared in landline magazine. The practice of attacking the messenger that the Owner Operator Independent Drivers Association has undertaken recently after the first peer reviewed article on sleep apnea and truck crashes. Take a read and let me know what you think- ed

The Owner Operator Independent Drivers Association (OOIDA) has, and will probably always be, one of the most vocal trucking industry groups opposing sleep apnea screening testing and treatment in trucking. One of their major valid points of opposition has been the lack of clear peer reviewed studies making a statistically valid correlation between untreated sleep apnea and increased risk of crash. This is a point I have made in previous Sleep Scholar articles.

Recently Burks et al published a new study coming in the journal Sleep “Non-Adherence with Employer-Mandated Sleep Apnea Treatment and Increased Risk of Serious Truck Crashes.” Information requesting a pre-publication copy of the study can be found at http://www.aasmnet.org/articles.aspx?id=618.

The Burks study is good research using both excellent medical criteria combined with the best of transportation accident analysis to make not only a clear crash risk correlation but make it in preventable crash where all reasonably confounding variable from a transportation crash research standpoint were also controlled.

In an LandLine Magazine Article OOIDA questions the objectivity of the latest study.

The following was submitted as a letter to the Editor of Landline Magazine. Due to the length it is unlikely to be published by OOIDA.

It is provided here for your reading pleasure. 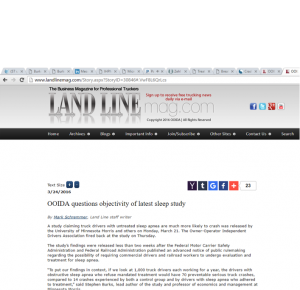 TO THE EDITOR – LANDLINE MAGAZINE

The article “Ooida questions objectivity of latest Sleep Study” got it wrong. Instead of being critical OOIDA should be celebrating it as a victory.

“They” finally did what we’ve been calling for. “They” published good research making a correlation between untreated sleep apnea and increased risk of crash in CMV operators in the US.

Ever since the 2008 MRB-MEP report came out, the research cited to justify sleep apnea screening and testing has been a joke. BUT… here is the problem. Trying to argue against a sleep apnea crash risk correlation is like trying to argue that when it rains water will not flow downhill.

Sleep apnea crash risk has been studied all over the world. It’s been studied in 4 wheelers and truck drivers. It’s been studied using insurance claims data, police accident data, and simulators. In Europe it is accepted as fact to the point that effective January of this year ALL drivers, not just CMV operators, have to be screened for sleep apnea. In the US when it’s been studied, it’s been like studying what happens to water when it falls on a perfectly flat truck stop parking lot. On a truck stop parking lot it doesn’t flow downhill. But, does that change the facts? On the other hand, if you want a truck stop to pay for an expensive storm water system, providing research it’s needed is just common sense. Demanding research like this is part of why public law 113-45 went through Congress with no opposition.

The Parks study showing no sleep apnea crash risk (FMCSA Technical Report 125) looked at older experienced drivers doing local pickup and delivery work where more of them had sleep apnea and compared them to younger drivers doing interstate line haul work. Other studies showing no increased crash risk have just asked drivers “How many accidents have you have in the past (x) years.” Not a good research technique.

This study not only used the most accurate method of testing for sleep apnea, it used reported accidents, DOT reportable accidents and analyzed them for preventability (eliminating accidents that clearly were not the fault of the driver). Drivers in the study had an option to appeal a preventable accident determination. I was a driver at Schneider during the study and was on an accident review board. This study went further than FMCSA has done in CSA. This study looked at accidents per mile driven and accounted for years of driving experience, type of work assignment, age of driver, practically any variable that was controllable that might statistically affect accident rates. The only variable they couldn’t account for was that drivers who refused treatment might have a more general disregard for safety regulations in general. It’s not ethical to conduct research that puts either the participants or the general driving public at risk. You can’t test drivers for sleep apnea and then let some drive without treatment to see what their accident rates are. This study used the best research methods available and did what good research is supposed to do. They discussed the limitations of the study in their conclusions.

The lead author is a former truck driver. The study was funded by 10 different sources of which Schneider was only one. None were groups with an “agenda” like The John Lindsay Foundation, National Sleep Foundation, American Academy of Sleep Medicine, Road Safe America, CRASH, or other safety advocacy groups we are all familiar with. VTTI has published non-peer reviewed research showing sleep apnea crash risk. Fusion Sleep has also published data from their own testing programs. But VTTI is the “pet” researchers for FMCSA and Fusion Sleep publishing its own data is just sales material. This was peer reviewed research published in one of the most respected research journals in the world. I’ve written for the Journal of Clinical Sleep Medicine. Peer review means that other researchers with expertise look at EVERYTHING about your study and critique it. If it’s not correct your study never gets published.

What’s sad is that Schneider has nothing to gain financially from a sleep apnea rule. Its program was actually started by a caring occupational health nurse Wendy Sullivan who was tired of doing return to work exams on drivers hospitalized for conditions aggravated by untreated sleep apnea. Wendy was saying the same thing Dr. John McElligott has been preaching to drivers since I first met him. Untreated sleep apnea is the engine driving many driver health problems.

This is not to say there are not LOTS of other problems to address with sleep apnea rulemaking. Even something as simple as, Who Pays? Just Friday I dealt with another driver popped for a sleep study by a medical examiner. He got a sleep study from a local sleep lab but his insurance denied the claim. The sleep lab is now holding the paper copy of the results hostage until he pays the $ 800 bill. I referred him to a reputable sleep lab (not the one I work for) that will retest him for the OOIDA member price of $ 250. Working with medical examiners we need to develop screening criteria that meet insurance requirements for “medical necessity”.

This study can do real good for drivers. A problem is that sleep apnea can be mild to severe. A problem is determining how bad a driver’s sleep apnea needs to be to warrant requiring treatment or a DQ on a medical card. I have severe sleep apnea. When I think back to what I was like before I got tested and treated it scares the begeebers out of me. But not everyone who has some level of sleep apnea poses the level of safety risk I did before treatment. This study now has accurate sleep study data with good accident records. Follow up research to help set the AHI requiring treatment will help drivers currently being forced into treatment by companies or medical examiners scared about liability, when medically it may not be required.

Instead of trying to question the objectivity of the study, drivers and OOIDA should be chalking this up as a win. Anyone who knows a lot about a particular subject has to make a living. In my opinion the conflicts of interest and objectivity problems raised in the OOIDA article are not valid. If we use the logic of the story, Todd Spencer and Andrew King have conflicts of interest in their quotes as they both receive support from OOIDA. Let’s get real.

Conflict of Interest Statement: The author Bob Stanton is a working truck driver and OOIDA member who has been under treatment for severe sleep apnea since 2002. He is the Co-coordinator of Truckers for a Cause a volunteer patient support group for drivers with sleep apnea. He has received consulting fees from Safety First Sleep Solutions and The Center for Sleep Medicine. He currently is an advisor to Dedicated Sleep. He has received donations of CPAP and CPAP supplies from a variety of manufacturers for distribution to drivers in need at major trucking shows. He has authored a variety of articles and made multiple presentations to sleep medicine conferences and groups on the issues involved with sleep apnea screening and testing in CMV operators. See LinkedIn profile for details.