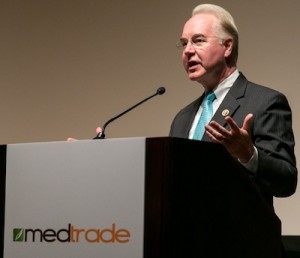 WASHINGTON, DC – Rep Tom Price, M.D. (R-Ga) was confirmed 2/10/17 as the next Secretary of Health and Human Services by a Senate vote of 52-47. American Association for Homecare president Tom Ryan released a statement immediately following the confirmation, saying that, "Dr. Price has a strong appreciation of the role that home medical equipment providers play in allowing people to remain in their homes when recuperating from an illness or dealing with long-term health challenges.

"He has been long-time advocate for legislation that would improve Medicare reimbursement practices for home medical equipment," continued Ryan, "and has led Congressional efforts to make sure that individuals who rely on home medical equipment in rural communities, and other less-densely populated areas, can get the products and services they need."

Price spoke on day three of last years Medtrade, giving attendees a dose of optimism while demonstrating a clear understanding of the challenges faced by HME providers. Price’s 45-minute talk and Q&A at Medtrade covered a wide range of topics. Here are some brief "excerpts" from his speech.

Competitive bidding: “It just doesn’t make any sense at all. As was mentioned, 39% of DME suppliers have gone out of business since this competitive bidded started. That’s not because they chose to retire...it’s because the federal government got engaged in the process and said, ‘We’ll pick the winners and losers”.

CMS: “They are not bad folks, but their charge is different than yours and mine. Your charge is to care for people. Their charge is to make the numbers add up...that hurts you from a professional standpoint, but patients are being compromised right now in their care because of what the government is doing. That is a story that needs to get out there.”


Audits: “Three to five years they say is the average [at the ALJ level]. If your appeal process lasts that long, then it is not a fair process...This is ridiculous. I believe we need a timeline. If the federal government can’t get their act together and move through the process, then it is decided in your favor after a finite period of time. For me, that would be six months. You can’t continue to have this going on and on and be over your heads and over your patients’ heads. It simply does not work.”

Fee for service medicine: “The nation has kind of bought into this in a superficial way, and there are folks in Washington who are pushing this; that all of health care, for all of us, needs to be run though this massive process of integrated care, value-based purchasing, or whatever the latest buzzword is so that every single incident of care must go through the federal government in some way. This is so they can make those numbers add up and control it. I believe strongly in fee for service medicine—the ability for one free American to identify another free American who has a service or a product that they desire, and to contract independently, outside the realm of government control. This is absolutely vital for quality health care in this country. In fact, I think it’s the only thinking that is going to save quality health care in this country.”

Regulation of the medical industry: “It’s not to say that we don’t believe in appropriate regulations and reasonable regulations. It’s not that the government does not have a role in all of this, because they are paying for a lot of it. But at the end of the day, these decisions—clinical care decisions—need to be made between patients, families, doctors, and providers—and nobody else.”